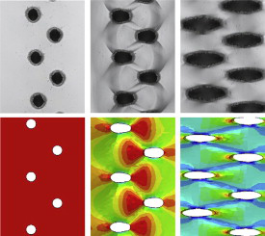 The deformation and fracture mechanisms of voided polymers and rubber-toughened polymers are an active research area where accurate fracture models still need to be proposed. The reason for the lack of accurate models stems from a lack of controlled experiments at the microscale, the scale of voids and cracks forming in polymers. In this paper, controlled experiments were carried out on thin polycarbonate sheets containing controlled arrays of laser microvoids, loaded in-situ under an optical microscope. Void dimensions were extracted experimentally and compared to a simple finite element model that was able to accurately predict macroscopic stress strain curves as well as the microscopic behavior in terms of void growth. It is shown that the local equivalent plastic strain at failure is independent of the void configuration studied and can therefore be used as a criterion for predicting fracture in voided polycarbonate under plane stress. We propose that it is not the intervoid spacing that controls fracture but the competition between intervoid strain localization and the spread of plasticity through the propagation of shear bands.